Online 1-to-1 maths lessons at home

Personalised for your child

What Is A Venn Diagram: Explained For Primary Parents And Kids

In this post we will be explaining what venn diagrams are, how they can be used and what your child will be learning about them throughout primary school. We’ve also included a number of venn diagram based questions to test your child’s skills, so take a look!

This blog is part of our series of blogs designed for parents supporting home learning and looking for home learning resources during the Covid-19 epidemic.

What is a venn diagram?

A Venn diagram (named after mathematician John Venn in 1880) is a method used to sort items into groups.

Venn diagrams explained: How to interpret them

An example of a simple venn diagram: Below is another example with three circles creating eight groups. When will my child learn about Venn diagrams?

Venn diagrams don’t officially appear in the National Curriculum until Key Stage 3 (secondary school), but your child could be introduced to them from as early as Year 2 as a method of interpreting or presenting data.

To help your child understand the different ways in which a venn diagram can be used, here is a variety of diagrams that they may come across. An example of a venn diagram which includes the 3x table and 10x table. 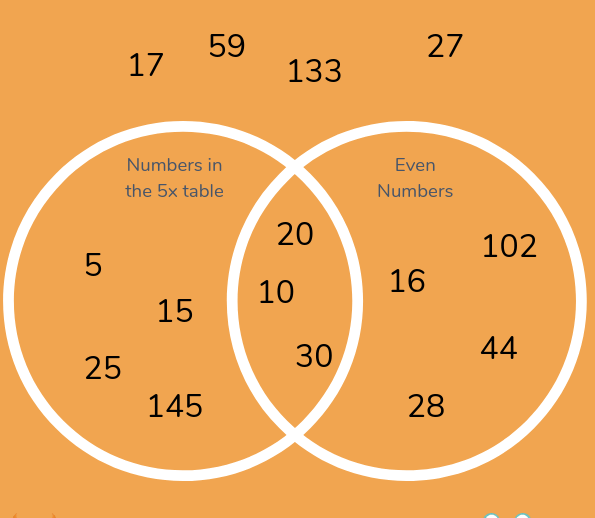 An example of a venn diagram including the 5x table and even numbers. An example of a venn diagram you could make with your child.