What I’ve Learnt About Maths Leadership in a Primary School: 10 Top Tips for Success

As an NQT I never pictured myself, in any way, successful within teaching. My confidence was at an all time low, I didn’t feel supported in my school, and I wasn’t sure this was the job for me.

But, now, towards the end of my first year as Maths lead, my fourth year of teaching, and in my second school, I am the happiest I’ve been.

Disclaimer here: I am a massive nerd for mathematics in all its forms.

I’m a relatively normal human being, (I think). However I love Maths, which is why Third Space asked me to share my experiences with you!

When the position of Maths Lead came up in my school I was excited at the possibility of the job but never thought I’d get it. After all I was still an RQT (third year), and it was the Deputy Headteacher who held the Literacy Leader post .

Like so many roles in school, I was thrown in at the deep end. No sooner had I started, than I was given the SATs results and end of year optional assessments from Years 3, 4 and 5.

I was asked, “can you do a gap analysis on pupils’ strengths and weaknesses?” I’ve always liked data but this being my first task was daunting!

Fractions, decimals and percentages came up as a huge issue. Although, when you look at the QLA analysis from the KS2 SATs 2017 that Third Space published, it’s glad to know we’re not unusual in that respect.

But it’s an important gap that needs plugging.

A quick and easy way to compare your schools' data to national averages, alongside each questions' content domain & description.

So my first quick win in bench-marking and monitoring our progress in improving teaching and learning in this area was clear. I added a small additional Fractions, Decimals and Percentages assessment on top of our termly tests.

A Time of Change in Primary Maths Leadership

Coinciding with my taking on this role, there have been quite a few changes from central government and the Standards and Testing agency; from the looming introduction of the times tables check in Year 4 and 8 other changes announced in November to the revised KS1 Maths frameworks.

I’ve had to work fast to digest and disseminate these among staff, to keep the profile of Maths high and positive in school, despite all these changes – and make sure I’ve kept one step ahead in pressing for progress at every level.

From that experience, I’ve put together a list of top tips and relatively quick fixes for a successful first year of primary Maths leadership. Read all 10 below…

If you’ve been in a particular year for a while, then maybe you’re not massively au fait with other year group expectations.

This is the time to remedy that. So read it. Read it and then read it again. Anything you’re not sure about, ask!

2. Take Your Time with Decisions

There are a lot of companies out there who will tell you that they are the answer to your problems. But you need to take stock of your own school, staff and pupils and choose the right programme for you.

There are a few crucial steps you should take before investing in any new product or maths intervention. Number one is making sure you’ve got evidence of its impact, and if still unsure, that the company is able to put you in touch with other schools to ask questions about it.

Some companies like Third Space, even organise showcase events where you can see the intervention in action and talk to other schools about what works for them.

3. Mastery Teaching in Maths Does Not Happen Overnight

In our school we have bought into the Lancashire planning disc, which gives clear, detailed planning and resources.

In an effort to introduce a more mastery lead approach to teaching Maths, I also shared some of the White Rose and NCETM documentation.

These have been particularly useful for their additional problem solving activities. I’m now considering whether to completely move across to that scheme for next year.

For more problem solving activities download these word problems on the four operations.

In response to an issue with arithmetic, the first ten minutes of our school day is now spent on arithmetic. Seven or eight simple calculations for each year group from Year 1 to Year 6, self-marked. This is no extra work for teachers but has had a significant impact on arithmetic skills.

Year 6 in particular have used (and loved) the Fluent in Five set of daily arithmetic activities from Third Space, adding in a competitive angle as they continually seek to improve.

The national curriculum states that from Year 2 upward your pupils should know their 2, 3, 5 and 10 x tables so expect this by the end of the year and allow them to attempt and experiment with others if appropriate.

Times Tables Rockstars is the outstanding resource to help support pupils in their times tables progress so get on the board the #TTRS train!

The biggest challenge you’ll have is to get the staff on board. Here’s my tip, if they’re reluctant: give them a login and an avatar and challenge them in front of their class to get a better score than them.

Children can practise their tables online at home and for those who lack internet access, just let them practise on any school ipads or print the sheets off. Do a champions/rock stars assembly once a month with a trophy and certificates and you will be amazed at the difference!

Something I’ve always done with my class is a simple ten minute activity in the afternoon from the Teacher’s pet website that I call Magic Maths.

It gives an opportunity to pick a number, spell it, odd/even, 1/10/100/1000 more or less, a number sentence and make it with coins. Simple but effective.

I rolled it out across the school and as a results place value knowledge improved in every year.

At heart I’m a Key Stage 1 teacher (I know…a man, in KS1!). I believe it’s our responsibility to start a child’s Maths journey off in the best possible way.

That means, you will need to use interventions from Year 1. Or you will risk being part of the reason why Year 6 teachers say their class aren’t ready for Year 6. Because they aren’t.

If they didn’t get it, they need to get it. They need it. Your Year 6 teachers need it. The longer you leave it, the bigger the gap gets.

If someone doesn’t pull their weight at some point in the journey, it makes everything a thousand times worse.

The biggest barrier here is obviously staffing and shortages of TAs.

This is where you have to be clever and take advantage of every available minute: 5 minutes in the morning; just before lunch when the class is tidying up; in assembly time.

If you’re flying solo in class, any moment that the children are working independently, when they’re getting their coats. Find the time. Make the time. And close the gap as soon as possible.

Third Space Learning offers weekly 1-to-1 catch up Maths lessons for all primary pupils as soon as they are able to operate a computer. Pupils work 1-to-1 each week with their tutor to plug gaps as they arise, all directed by the class teacher.

8. Get Out Into Other Maths Classrooms

I’m not saying monitor the life out of your colleagues, especially if you’re not SLT, but get in there and find out what’s going on. Your colleagues are likely not Maths specialists and will appreciate the support you can give them.

This was how I got back in touch with teaching KS2 Maths, something I’ve not really seen since my PGCE, and I was delighted to see lots of fantastic work being done, including the implementation of my calculation policy!

One thing my classroom visits also exposed me to was the lack of concrete resources and manipulatives being used at KS2.

So now I’m currently making my way through the KS2 classes teaching Maths using concrete resources and manipulatives.
KS2 are loving it!

When I asked Year 5 if they’d enjoyed their predominantly practical week on fractions using Numicon, pegs, cubes, foam ten frames and anything else I could get my hands on the response was unequivocal:

“It’s made fractions easier because I can see what I’m doing now. I’ve had a really good week and I usually don’t enjoy Maths as much.”

10. Take Stock of What’s in Those Maths Cupboards

Schools can be a weird place. Class teachers tend to be hoarders. ‘This is my box of Numicon. It belongs in my classroom’. That needs to change. They’re school resources. Year 4 might need the bead bars this morning, so share them!

Bonus Tip: Be Prepared for Some Ideas Not to Work!

Why didn’t I think about the logistics involved in my friend’s school in Dubai and my class undertaking a Maths challenge session together? That time difference really didn’t work in our favour!

On reflection, I was apprehensive about getting into classrooms to begin with. As only a 4th year teacher and not an SLT member, who am to tell you how to teach Maths to your class?

Then as the year has progressed, I have realised that it’s actually my job to do just that.

I’ve grown in confidence having seen the impact of my work. Not only are pupils now on a daily basis problem solving in Maths and using high quality resources; they are also even using their practical resources to perform their problem solving and developing real number sense.

Being told that Year 2 love the Magic Number Mat in the afternoon, that Year 3 are getting super competitive using their Maths Mats challenges from Twinkl and that Year 6 can’t wait to get through the door to complete the Fluent in Five – that’s what I do it for!

Obviously, the crucial data now to look at will be the results from from Year 6 KS2 SATs but this is a long term goal.

If you’re taking on a position like this, realise that you’ve been given the job for a reason by your SLT. With that in mind, here’s a few final pointers from me:

• Believe in yourself and your own opinions.
• Do your research.
• Use Twitter (follow @thirdspacetweet for starters)
• Share ideas and good practice.
• Support your colleagues.
• Suggest new ideas to them.
• Listen to their ideas and suggestions and take them on board.
• Give them the freedom to try things and then be open to the possibility of rolling it across school if it works.

The year is almost over but changing the culture of Maths in a school is not a one year job. I look forward to carrying on this work next year, when to quote my Headteacher, it will become ‘just another plate to spin’.

Enjoyed this? Read about the 20 Maths Strategies at KS2 that Third Space use to double progress in 14 weeks! Make the most of the next few weeks 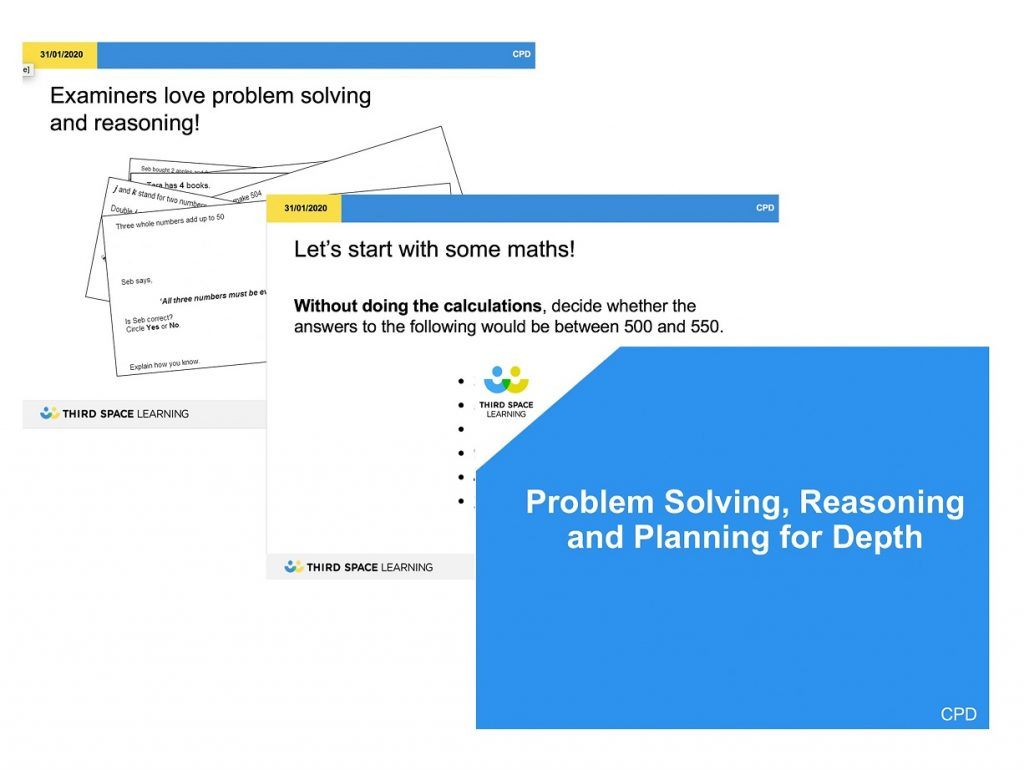