One to one interventions that transform maths attainment

Plug gaps and catch up

Chances are you’re probably well aware of Newton, Einstein and Turing, but when it comes to famous female mathematicians, their achievements are less well known.

Unfortunately, there is a stereotype that still prevails today that maths is a male subject and that girls are no good at it.

Fortunately though, that couldn’t be any further from the truth, and so in celebration of International Women’s Day we’ve put together a fabulous list of some of the world’s greatest famous female mathematicians that you can use all year round.

We hope you can use these inspirational individuals and their incredible work to show children that maths is all about the journey of discovery, not someone’s gender.

What Maryam did: Iranian-born Maryam Mirzakhani was one of the greatest mathematicians of her generation, making exceptional contributions to the study of the dynamics and geometry of mathematical objects called Riemann surfaces.

She was a professor at Stanford University and held a Ph.D from Harvard University. In 2014, she was the first woman, and first Iranian, to be awarded a Fields Medal (also known as the International Medal for Outstanding Discoveries in Mathematics) for “her outstanding contributions to the dynamics and geometry of Riemann surfaces and their moduli spaces”.

Maryam’s impact: Her work had a huge impact in shaping her field and has opened up new frontiers of research that are just starting to be explored. She shows us that, even in a male-dominated field, women can be role models and lead the way forward with their discoveries.

Katherine’s impact: Despite being one of the first three black women to attend West Virginia University, she dared to challenge the stereotypes which existed around her and has since become a pioneering example and role model for females everywhere of African American women in STEM.

She was responsible for calculating the trajectory for Project Mercury and the Apollo 11 flight to the moon, which means she helped the first spaceship and the first Americans reach the moon! Believing that “everything is physics and math(s)”, she encouraged girls to pursue careers in STEM and often gave talks on the subject.

Mary’s impact: Thanks to her bravery in daring to defy the status quo, her work has gone on to strongly influence the modern theory of dynamical systems, and she even has a mathematical theorem named after her!

What Sofia did: Russian mathematician Sofia Kovalevskaya made monumental contributions to analysis, partial differential equations and mechanics. She was a pioneer and icon for females in mathematics and STEM subjects everywhere.

The first woman to obtain a doctorate in mathematics, she went on to gain global recognition in the mathematical community due to her paper on partial differential equations and was awarded the Prix Bordin from the French Academy of Sciences, a prize given to the best solution of a specific mathematical problem.

Sofia’s impact: Despite scrutiny and doubts from her male counterparts and society as a whole, Sofia refused to give up academia and has paved the way for other famous females mathematicians to follow in her footsteps!

What Sophie did: Marie-Sophie Germain was a French mathematician and physicist who, despite opposition from society (and her parents) due to her sex, persevered and went on to greatly contribute to maths. Due to the unfair gender restraints at the time, she was not able to pursue a career in the subject, but that did not stop her!

She worked on it independently throughout her life and through her hard work, she not only advanced the field of number theory, but was also one of the pioneers of elasticity theory, becoming the first woman to win the grand prize from the Paris Academy of Sciences for her essay on the subject.

Sophie’s impact: She proved to the people around her that their assumptions based on her sex were wrong and that females are incredible mathematicians. Although she was not allowed to attend university, thanks to her unfaltering determination and bravery she became the very first woman to make important original contributions to mathematical research and in doing so, carved out the way for women today.

What Marjorie did: Gifted African-American mathematician and educator Marjorie Lee Browne was the first black woman to gain a doctorate in maths. She joined the faculty at North Carolina Central University, shortly after obtaining her Ph.D, where she taught for over thirty years. She was named chair of the Mathematics Department there in 1951, which allowed her to guide the way for some of the earliest computer use in her field.

Marjorie’s impact: She noted that the lack of involvement of black women in STEM subjects was a huge societal issue that needed to be addressed and believed that education was a viable solution. She took advantage of her position as department chair at NCCU to gain a grant to educate secondary school teachers in advanced maths and spent much of her time with local secondary school teachers teaching them about linear algebra, encouraging them to study and obtain advanced degrees and improving the level of maths education as a whole in North Carolina. Her dedication to inspiring confidence in female mathematicians and providing quality education to others for the greater good, has helped her to become a role model for women in STEM everywhere.

“If I had to live my life again, I wouldn’t do anything else. I love mathematics.”

What Rachel did: Television presenter Rachel Riley studied Mathematics at Oxford University. At age 22 she joined Countdown where she applies her maths skills on a regular basis, handling the letters and numbers rounds to find solutions to complicated problems. She has gone on to present other shows including 8 Out of 10 Cats Does Countdown and The Gadget Show, and even starred as a contestant on Strictly Come Dancing!

Rachel’s impact: Riley has visited many schools over the years in an endeavour to inspire children on the “joys of applied maths, quantum mechanics and time travel” and increase the numbers of females participating in STEM subjects. She has shown us that pursuing your passion and studying maths at university can lead to us down different avenues, including less conventional ones such as a career in television!

“There’s no reason for men to be better at maths than women – it’s just about our perception.”

What Malala did: Malala Yousafzai is a Pakistani activist for female educational rights, and the youngest person to win the Nobel Peace Prize, at just age 17! She started participating in activism when she was only 11 years of age and began writing blogs for the BBC detailing what life was like under Taliban rule and her beliefs on the important role education plays for girls across the world – and especially in Pakistan.

In her home province of Swat Valley, girls were banned from attending school by the Taliban. After appearing in the New York Times documentary, she gained global recognition as a speaker on the education of girls, and has brought about huge change in this area ever since.

She took A-Level Mathematics and is currently studying Philosophy, Politics and Economics (PPE) at Oxford University. She has won many awards and has been named one of Time Magazine’s “100 Most Influential People in the World”!

Malala’s impact: Due to the nature of Malala’s work, an attempt was made on her life when she was on her way to school one morning. It was unsuccessful, and she refused to let this stop her fighting for her cause, continuing to give speeches and interviews for women’s educational rights. Her story drove the United Nations to launch a campaign for the education of all of children worldwide, which ultimately led to Pakistan’s first Right to Education Bill.

Malala’s brave and determined actions illustrate that females do have the power to change the world regardless of contemporary societal beliefs and that education can be a force for that change! She also shows us that education is a privilege, so, if we want to go on and study maths, we should!

“Education is neither eastern nor western. Education is education and it’s the right of every human being.”

What Mayim did: American actress Mayim Bialik studied neuroscience at UCLA, where she went on to obtain a Ph.D in 2007. She is best known for her role as Dr. Amy Fowler in the comedy The Big Bang Theory, but has starred in countless other television shows and films.

Mayim’s impact: Despite success in her early acting career, Mayim still decided to study neuroscience at university because she had a passion for the subject. She believes strongly in the involvement of women in STEM subjects and has spoken at events on the topic encouraging girls to pursue these disciplines. She also plays the bass and trumpet!

Online 1-to-1 maths lessons trusted by schools and teachers
Every week Third Space Learning’s maths specialist tutors support thousands of primary school children with weekly online 1-to-1 lessons and maths interventions. Since 2013 we’ve helped over 100,000 children become more confident, able mathematicians. Learn more or request a personalised quote to speak to us about your needs and how we can help. 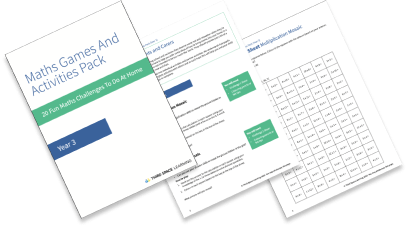